The mystical supergroup A Perfect Circle is here

Sideways Festival second day was the one with the biggest expectation because of the supergroup A PERFECT CIRCLE. It was the band first ever concert in Finland and hopes were pretty high. The Americans recently released a new studio album “Eat the Elephant” (the first one in 14 years). As well other interesting groups were performing that day: American psychedelic band BARDO POND, Finnish psychedelic doom metal squad DARK BUDDHA RISING, Canadian experimental rock collective YAMANTAKA // SONIC TITAN, Finnish shoegaze/kraut/punk ensemble TEKSTI-TV 666, Swedish post-punk group MAKTHAVERSKAN, etc. Here is the concert report:

One of Saturday’s big surprises was the Finnish duo URSUS FACTORY. The two-man band rocked the Sahara stage with their straight, raw and loud primitive garage rock full of noisy guitars and aggressive drums.

A little bit later at the Aurora stage something rare and great took place with the unique performance of RÄTTÖ & LEHTISALO. RÄTTÖ & LEHTISALO is an experimental/avant rock band featuring two members of the Finnish group CIRCLE, Jussi Lehtisalo and Mika Rättö, and also some members of other bands like AAVIKKO. The group offered a weird and positive concert in the outdoor Aurora stage.

Another really interesting surprise was the amazing instrumental group band NYOS at the Sahara stage. The band consists of drummer Tuomas Kainulainen and guitarist Tom Brooke. Their sound is an effective mix of epileptic math rock with cosmic post-rock.

I couldn’t believe what my eyes and ears experienced that day, this Finnish duo is one of the best new live rock acts: very complex sound with a lot of texture and colour. And the most important things is that this guys love playing music in front of people. Amazing discovery at the Sideways Festival!

And the most strange, dark and creepy concert of this second day at Sideways Festival was the one offered by the Finnish psychedelic doom group DARK BUDDHA RISING. This loud and space driven collective played at the indoor stage Black Box. The band played a compact set of crunchy, heavy and slow tunes, for example: “D”, “Mahathgata I”, “K”, “Ashtakra I”, “Chonyidt 45”, etc. In conclusion, watching DARK BUDDHA RISING was a frightening, unique and fun experience full of dark light effects, brutal guitars, funeral drums, metallic bass and murderous vocals.

Another hidden gem that we discovered from this second at the Sideways Festival was the post punk and indie rock squad MAKTHAVERSKAN. The Swedish band performed a vivid and emotional set at the Sahara stage, full of playful guitars, low tuned bass and dynamic drums. But the most important regarding this band is the charismatic and transparent voice of their singer Maia Milner.

For less than an hour the hipster audience was hypnotise with their unique, captivating and kind of obscure sound. Here is the setlist: “In My Dreams”, “Outshine”, “Vienna”, “Comfort”, “It’s You and It’s I”, “Eden”, “Witness”, “Leda”, “Front” and “Antabus”.

And if you think you have seen weird and extreme bands in your life, you haven’t seen YAMANTAKA//SONIC TITAN. The Canadian experimental music and performance art collective is something else. Melodic vocal harmonies of C-pop and j-pop, aggressive heavy metal riffs, industrial percussion and progressive keywords.

The audience witnessed in the small indoor Upstairs stage one of the most unique performance of this year Sideways Festival. All the band members had face makeup and colourful clothes as weird and apprehensive as their music.

Their setlist included the following songs: “Someplace”, “Dark Waters”, “Yandere”, “A Star Over Pureland”, “Hungry Ghost”, “Dirt”, “Tawine”, “One”, “Reverse Crystal // Murder of a Spider” and “Out of Time”.

The American quintet BARDO POND amazed us with an hour of hypnotising performance in the indoors Black Box stage. The droning and distorted guitars of Michael and John Gibbons were the perfect companion for Isobel Sollenberger esoteric voice, mixed with the thick bass lines of Clint Takeda and the noisy drums of Jason Kourkounis.

In conclusion, it was an out of this world experience to witness a BARDO POND concert for the first time in Finland, it was an interesting sonic journey full of psychedelic rock, space rock, shoegaze, noise, reverb, feedback, white noise, drone and post-rock.

Finally, at the Sideways stage it was the turn of the band everybody have been waiting for the past 20 years to see: the almighty A PERFECT CIRCLE. The American supergroup began interpreted plenty of songs from their brand new record “Eat The Elephant”. These new tunes sounded more mature, with a more mellow sound (piano and electronics). Maynard James Keenan voice took the front seat while the rest of the band served as the perfect sound companion.

Also the band performed the good old classics that the Finnish audience was dying to listen: “The Hollow”, “Weak and Powerless”, “The Package”, “Rose”, etc. The enigmatic guitar of Billy Howerdel sounded so powerful and metallic. While Matt McJunkins’s bass and Jeff Friedl’s drums gave the precise heaviness and intensive rhythm that the songs needed for an outstanding and massive sound.

Finally, A PERFECT CIRCLE said goodbye with the AC/DC cover “Dog Eat Dog” and their powerful anthem “The Outsider”. The Americans closed with an amazing performance of melodic, loud, energetic and surreal alternative rock/metal. It was worth the almost 20 years wait, it was worth every goddam second!Here the complete setlist: “Counting Bodies Like Sheep to the Rhythm of the War Drums”, “Hourglass”, “The Hollow”, “Weak and Powerless”, “Rose”, “Disillusioned”, “The Contrarian”, “Thomas”, “The Package”, “So Long, and Thanks for All the Fish”, “Talk Talk”, “The Doomed”, “Dog Eat Dog” and “The Outsider”. 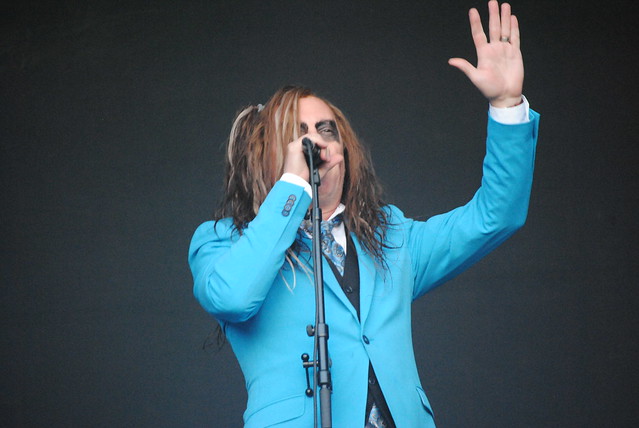 Heathen – Empire of the Blind

Error: An access token is required to request this resource.
Type: OAuthException