Closing time with The National

One of the best surprises of the Sideways Festival was the hooligan electro-punk of the English bandSLEADFORD MODS. The duo’s performance was funny, raw, danceable and everything in between. It was a condense live set with many popular songs from their catalog like “Jobseeker”, “B.H.S.”, “Drayton Manored”, “Army Nights”, “I Feel So Wrong”, “Jolly Fucker”, etc. Jason Williamson and Andrew Fearn are the dinamic duo, the first one always delivers the best lyrics exploring the English culture while the second one offers abrasive rap/punk/electronic tunes. Electronic must minimalist punk-hop rants for the working class.

CIGARETTES AFTER SEX were the first band that took the main stage for the third and last day of this amazing festival. The band lead by Greg Gonzalez delivered some subliminal tunes mixed with dream pop, slowcore, ambient pop and shoegaze. Gonzalez with his minimalistic guitar soft voice served as a ceremony master guiding the ears of the audience to a long journey filled with a lot of delicate feedback, ambient tunes, simplistic song structure, and dream-like lyrics.

The continuous and precise drumbeats of Jacob Tomsky could be said to have been one of the highlights of the band’s performance. The drummer did not stop, he kept the rhythm flowing at the same time as he beat the fragile drums sticks against the small drums again and again. At the same time Randall Miller stood with his bass and captivated the audience with his eloquent energy that applied on the thick strings of his instrument.

For a band that only have one studio album and one EP, their entire 60 minutes set was enough time to prove their great live performance. Among the songs featured were “Apocalypse”, “Nothing’s Gonna Hurt You Baby”, “K”, “Affection” and “Sunsetz”. Slow and melodic summer music for the audience to relax and enjoy the weather while sitting on the grass drinking a glass of wine with your friends by your side.

At the indoors small Upstairs stage we watched the one hour set of the Finnish alternative blues/boogie/country trio TALMUD BEACH. The trio got together with the also Finn folkish guitarist Faarao Pirttikangas.

The music was rhythmic and enjoyable. With a lot of jams and kind of improvisation. The trio and the guitarist have an album together, so most of the music played in this live set was from the collaboration album previously mentioned.

The small crow that gathered in front of the stage was pretty convinced with the quartet’s bluesy indie music.

This group is maybe the best kept secret from Finnish music. Their weird, intelligent and psychedelic black metal is out of this world. That’s the reason why their extreme and claustrophobic live set is a total fuck up experience full of colourful darkness, cosmic noise, powerful feedback and of course amazing black metal.

The Finns played one hour long set at the indoors stage Black Box. The audience, mainly metal heads and wannabe hipsters, enjoyed the eclectic performance. Among the songs featured were “Uraanisula”, “Tyhjä Temppeli”, “Satraatio”, “Lahja” and “Vasemman Käden Hierarkia”. No other band can beat ORANSSI PAZUZU live gigs, no one!

What can we say about that enigmatic, vivid and super enjoyable concert offered by THE NATIONAL? As the American group are considered one of the most popular alternative rock bands from Cincinati, Ohio nowadays the quintet offered an astonishing performance including no major surprises by playing fifteen songs during an hour and a half. The band started strong with the reflective tunes “Nobody Else Will Be There” and “The System Only Dreams in Total Darkness”, from their latest effort “Sleep Well Beast”.  These two songs were loaded with a splendid vocal performance, joyful guitars, dynamic percussion, and delicate piano parts. Throughout the gig, technicolor images/patterns of the band were shown behind the band on a huge screen.

When the group played their popular songs such as “I Need My Girl”, “About Today”, “Don’t Swallow The Cap”, “Bloodbuzz Ohio” and “Fake Empire” we could understand the many reasons why this band are one of the most respectable acts nowadays in the alternative rock scene: obscure but melodramatic guitars, melodic pop melodies, folk echoes, and that intuitive indie rock sensibility. Matt Berninger being in charge of guiding the sound of the group with his charismatic and exquisite voice. The Dessner brothers (Aaron and Bryce) seduced us with their smooth guitar passages that transported us to a happy place -plus they also took care of backing vocals and keyboards/piano duties in some songs-. Scott Devendorf hypnotized us on bass thanks to his uniform and linear playing. His brother Bryan Devendorf kept the impulsive rhythm at all times.

To summarise, THE NATIONAL played an upbeat and fun concert, and the vibe and connection with the audience was amazing thanks to the band’s leader Matt Berninger. The Finnish audience were held for an hour and a half in perpetual happiness. The live act of band is undoubtedly a whole big party and interesting experience in terms of sound and feelings. Long live to THE NATIONAL!

And the last band to play in this 2018 edition of the Sideways Festival was DEERHUNTER. The group from Atlanta, Georgia started the show by opening quickly with the spaced and shoegazed intro track “Cover Me (Slowly)”followed by the introspective and happy tune “Agoraphobia”, both tracks belong to their third studio album “Microcastle”. They continued in the spirit of relax/folk/indie sounds with the psychedelic and dream pop in songs like “Revival” and “Futurism”. Their ambient/experimental riffs that sounded like an interesting mix of GALAXIE 500, SONIC YOUTH and CAN.

Bradford Cox spit without pity thoughtful lyrics so eloquently that connected pretty well with hipster audience. The smart guitar sound of Lockett Pundt alternated between dreamy chords and more up-tempo sections. Meanwhile, Bradford Cox supported the band’s sound through krautrock riffs on his guitar creating an effect of multiple layers and noises. For its part, the rhythmic bass played by Josh McKay was a good touch in all the songs. Also, Javier Morales was a perfect complement to the group’s sound structure adding some keys, piano and saxophone parts. And one should not forget the versatile drum work by Moses Archuleta, who brought wider and climatic sound in some songs, for example “Take Care” and “Desire Lines”.

The band said goodbye with their funky song “Snakeskin” from the album “Fading Frontier”. This concluded a brilliant performance of one hour. The group showed that they can be the most unique, funny, experimental and sharp band that we have had the pleasure to see live. The Sideways Festival was a successful event and an amazing experience in the heart of the Helsinki city. And DEERHUNTER was the perfect band to close this 2018 edition.

In conclusion, the third day of the Sideways Festival was also great and exciting: super sunny and nice weather, receptive crow, and best of the best performances by ORANSSI PAZUZU, THE NATIONAL, DEERHUNTER, THE COMET IS COMING, and SLEAFORD MODS. Too bad that we missed the following concerts: SIINAI, KAUKOLAMPI, VISIBLE CLOAKS and RUUSUT. Sideway Festival’s last day gathered 8,000 music fans. 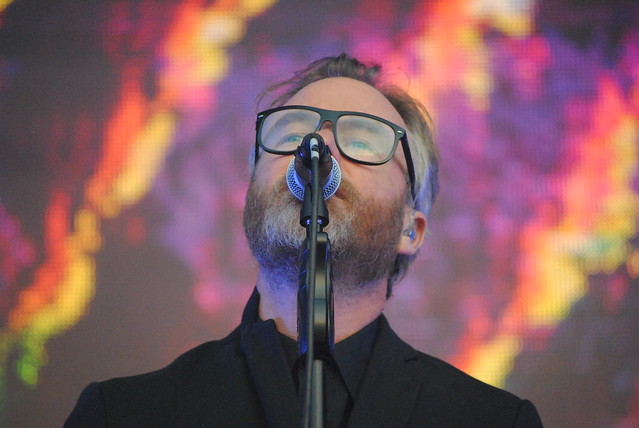 Error: Error validating access token: The session has been invalidated because the user changed their password or Facebook has changed the session for security reasons.
Type: OAuthException
Solution: See here for how to solve this error